Lord Rama was born on Navami Tithi during Shukla Paksha of Chaitra month. Each year this day is celebrated as birthday of Lord Rama. Lord Rama was born during Madhyahna period which is middle of Hindu day. Madhyahna which prevails for six Ghatis (approximately 2 hours and 24 minutes) is the most auspicious time to perform Rama Navami Puja rituals. The mid-point of Madhyahna marks the moment when Shri Rama was born and temples symbolize this moment as birth moment of Lord Rama. The chanting of Shri Rama and celebration reaches its peak during this time.

Due to widespread use of western clock and Gregorian calendar people assume 12 p.m. as Madhyahna moment. This could have been correct if sunrise and sunset occur exactly at 6 a.m. and 6 p.m. respectively but at most places sunrise and sunset timings are different from six O'clock. Hence the exact time to celebrate birthday of Lord Rama falls between 11 a.m. and 1 p.m. for most Indian cities. DrikPanchang.com list Hindu midday moment for all cities and this moment should be used to mark the birth of Shri Rama.

Other links related to Lord Rama 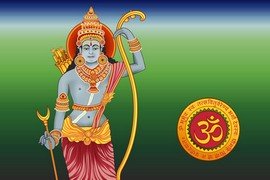