According to legends, during the churning of the milky ocean, Dhanvantari emerged with the nectar pot on the very same day. Hence for those who practice Ayurveda or medicines, the day of Dhanvantari Trayodashi is very significant. On this day people worship Lord Dhanvantari and pray for the good health and physique.

The very same day is also observed as Dhantrayodashi or Dhanteras. In the context of Dhantrayodashi, the day relates to wealth and prosperity and is considered significant for Lakshmi-Kuber Puja. On this day people worship Goddess Lakshmi along with Lord Kuber for material wealth and prosperity. Lord Kuber, who is considered treasurer of the riches of the world, is worshipped along with Sri Lakshmi the Goddess of wealth.

Other links related to Diwali Puja 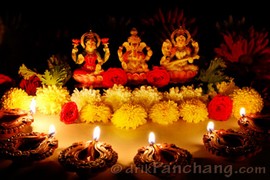