Makar Sankranti is four days festivity period which is dedicated to Lord Sun. All rituals during Makar Sankranti are gestures of thanksgiving to natural resources which make life possible on the Earth. The Sun God is worshipped for bestowing good harvest and nurturing livestock. The cattle especially bulls and oxen are worshipped for their significance in traditionally ploughing fields.

In Andhra Pradesh, similar to Tamil Nadu, Makar Sankranti is celebrated for four days. The day before Sankranti is known as Bhogi Pandigai. The main Sankranti day is known as Pedda Panduga, which is followed by Kanuma Panduga and Mukkanuma. 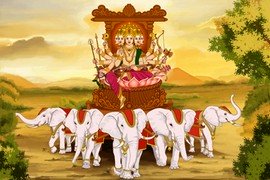