Makar Sankranti is a significant day as the Sun enters Makar Rashi (i.e. Capricorn zodiac) as per Vedic astrology. In Hinduism the Sun is worshipped and known as Surya Deva who nourishes all living beings on the Earth. Although all twelve days in Hindu calendar when Surya Deva transits a Rashi are considered significant for worshipping Surya Deva, taking religious bath in holy water bodies and performing charity activities but the day when Surya Deva starts moving into Makar Rashi is considered the most auspicious day of the year to worship Lord Surya.

Apart from deities, live stocks and cattle e.g. bulls, cows and oxen are worshipped during Sankranti.

Numerous rituals are followed during Sankranti. These rituals vary from state to state and within a state region to region. However,

Makar Sankranti is one of the few festivals which are celebrated throughout India unanimously. However each state and region has its own custom and rituals to celebrate Makar Sankranti along with local legends associated to it. Although Sankranti concept is common in all regional calendars irrespective of being lunar or solar calendar, most regions have given a local name to Makar Sankranti.

However, in all regions Sankranti is observed as the day of thanksgiving to Surya Deva, the Lord of the light and energy who nourishes all living beings on the Earth.

Makar Sankranti is not a compulsory Gazetted Holiday in India. However, in most states one day holiday is observed on the day of Makar Sankranti.

Sankranti in other Religions

Although Sankranti is mainly Hindu festival but Sikh community also celebrates it by observing Lohri a day before Makar Sankranti day.

Other pages related to Sankranti 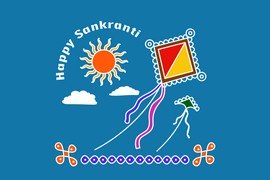