Ahoi Ashtami fasting is done about 8 days before Diwali on Krishna Paksha Ashtami. According to Purnimant calendar followed in North India it falls during the month of Kartik and according to Amanta calendar followed in Gujarat, Maharashtra and other southern states it falls during the month of Ashwin. However it is only name of the month which differs and the fasting of Ahoi Ashtami is done on the same day.

The fasting and Puja on Ahoi Ashtami is dedicated to Mata Ahoi or Goddess Ahoi. She is worshipped by women for the well-being and long life of their children. This day is also known as Ahoi Aathe because fasting for Ahoi Ashtami is done during Ashtami Tithi which is the eighth day of the lunar month.

On Ahoi Ashtami mothers hold a fast from dawn to dusk for the well-being of their sons. Fast is broken during twilight after sighting stars in the sky. In some regions women break the fast after sighting the moon but it might be difficult to follow as the moon rises late in the night on the day of Ahoi Ashtami.

On the day of fasting, after taking morning bath women should take the pledge, which is called Sankalp, to keep the fast for the wellbeing of their children. It is also recited during Sankalp that the fasting would be without any food or the water and the fast would be broken after sighting the stars or the moon according to their family tradition.

During Sayankal i.e. before the sunset, Puja preparations should be done. Women should draw the image of Goddess Ahoi on the wall. Any image of Ahoi Mata used for the Puja should have Ashtha Koshthak (अष्ठ कोष्ठक) i.e. eight corners due to the festival being associated with Ashtami Tithi. Along with Goddess Ahoi the images of Sei (सेई) (i.e. hedgehog and its children) should also be drawn near to the Goddess. Sei is a spiny mammal from the legend of Ahoi Ashtami. If drawing image on the wall is not feasible then big Wallpaper of Ahoi Ashtami Puja can also be used. Most Puja calendars also depict seven sons and daughter-in-laws from the legend of Ahoi Ashtami.

A small earthen pot preferably Karwa is kept on the top of the Kalash. Karwa is filled with the water and covered with its lid. The nozzle of the Karwa is blocked with the shoots of the grass. The commonly used shoot is known as Sarai Seenka (सरई सींक) which is a type of willow. The seven shoots of the grass is also offered to Ahoi Mata and Sei during Puja. The shoot of Sarai is sold during the festival especially in the small towns of India. If shoot of the grass is not available then cotton buds can be used.

The food items which are used in Puja include 8 Puri, 8 Pua and Halwa. These food items are given to some elderly lady in the family or the Brahmin after adding some money.

The best time to perform Puja is during Sandhya time just after sunset. During Puja Ahoi Mata is worshipped with all rituals.

Usually women perform Ahoi Ashtami Puja along with the other female members of the family. During Puja women narrate the story of Ahoi Mata. There are several versions of Ahoi Ashtami legend but most of them describe how female devotee of Ahoi Mata got blessed by seven sons even after getting cursed for accidently killing the offsprings of Sei. Sei is also worshipped along with Ahoi Mata and seven grass shoots along with Halwa is offered to Sei.

In some communities, for the occasion of Ahoi Ashtami, Ahoi of silver is also made. Silver Ahoi is known as Syau (स्याउ) and worshipped with Akshata, Roli and the milk during the Puja. Later it is worn in the neck as a pendant with the help of a thread along with two silver pearls.

Aarti of Ahoi Ashtami is performed at the end of the Puja.

Women either give Argha to the stars or the moon depending on the family tradition before breaking the fast. The time when the stars get visible in the sky and the time of moonrise on Ahoi Ashtami can be checked at Ahoi Ashtami Puja Timings.

Both Karwa and Kalash are used for giving Argha to the stars or the moon after the Puja. The water of big Kalash is used during the morning bath of Roop Chaudas which is also known as Narak Chaturdashi.

Women who have difficulties in conceiving, have miscarriage or don't have a boy child also perform Puja on the day of Ahoi Ashtami.

In this context, the day of Ahoi Ashtami is known as Krishnashtami. This day is very significant for those couples who don't have any children. On the very same day couples take dip in the Radha Kunda at Mathura, perform Puja and make offering of the Kushmanda. Devotees from far-flung places throng to Radha Kunda to take a holy dip in the sacred pond during Arunodaya i.e. just before the sunrise. 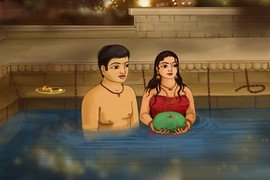