Lord Krishna was born during Dvapara Yuga out of four cyclic Yugas described in Hindu scriptures. Based on scripture details and astrological calculations the date of Krishna's birth is 19th July 3228 BCE and date of Krishna's death, when Lord Krishna returned to His eternal abode of Vaikuntha, is 18th February 3102 BCE. The present Yuga which is known as Kali Yuga started after the death of Lord Krishna.

Lord Krishna was the eighth son born to the princess Devaki and her husband Vasudeva in Mathura city. However Krishna raised by his foster parents Yashoda and Nanda in Gokul a small village in Mathura district. Lord Krishna was born during midnight on Ashtami Tithi during Krishna Paksha in Hindu calendar. All Hindus commemorates this day as Janmashtami or birth anniversary of Lord Krishna.

Each incarnation of Lord Vishnu on the Earth is with a purpose and to accomplish some definite tasks. Lord Krishna came to the Earth to kill king Kansa and to relieve the people of Braj from his torture and tyranny. Later Krishna participated in the events of the Mahabharata and Lord Krishna's participation had profound effect on the Mahabharata war and its consequences.

Lord Krishna is easily recognized by His representations. Krishna is usually shown with blue skin. He is often shown with a flute, wearing a yellow silk Dhoti and peacock feather crown. Tribhangi Mudra is the most popular pose of Lord Krishna in which He stands with one leg bent in front of the other and raises a flute to His lip in a relaxed pose.

Lord Krishna never married His childhood lover Radha but He is pictured with Radha in most of the paintings. It was Rukmini who was the legitimate wife of Lord Krishna.

Lord Krishna was born in Mathura and raised in Gokul. Lord Krishna spent his childhood days with Radha and other Gopis in Vrindavan which is the site of an ancient forest.

Other pages related to Lord Krishna 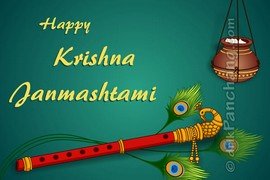 Dahi Handi is a famous sportive event organized in the cities of Maharashtra and Goa. Dahi Handi is celebrated on the next day of Krishna Janmashtami.