Traditionally, on Ahoi Ashtami mothers used to fast from dawn to dusk for the wellbeing of their sons. However, in modern India, the fast is observed for the wellbeing of all children i.e. for sons as well as for daughters. Fast is broken during twilight after sighting stars in the sky. Some women break the fast after sighting the moon but it might be difficult to follow as the moon rises late in the night on Ahoi Ashtami.

Ahoi Ashtami fasting day falls approximately eight days before Diwali Puja and four days after Karwa Chauth. Similar to Karwa Chauth, Ahoi Ashtami is more popular in North India. This day is also known as Ahoi Aathe because fasting for Ahoi Ashtami is done during Ashtami Tithi which is the eighth day of the month.

Similar to Karwa Chauth, Ahoi Ashtami is a strict fasting day and most women abstain even from water throughout the day. The fast is broken only after sighting the stars. 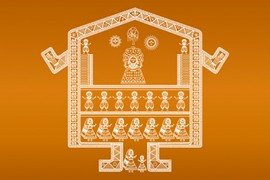