Lord Hanuman - the Mahavira and Bajrangbali

Lord Hanuman is one of the most important deities who are worshipped in Hinduism. Lord Hanuman is most popularly known as an ardent devotee of Lord Rama and He is a central figure of Hindu epic Ramayana. He is one of the Chiranjivi(s) i.e. immortal living beings who are to remain alive on the Earth forever.

Devotees of Lord Hanuman are known as Hanuman Bhakta. Lord Hanuman is considered a lifelong Brahmachari. It is believed that He has taken the vow to celibate throughout His life and to remain an ardent devotee of Lord Rama. Hence, Lord Hanuman is the most significant deities for those who have taken the vow of celibacy especially among male devotees.

Lord Hanuman is the son of Mata Anjana and Kesari. He is also described as the son of Vayu Deva i.e. the wind god.

Lord Hanuman is lifelong Brahmachari. Lord Hanuman dedicated his life in the service of Lord Rama and he never got married.

Lord Hanuman resembles with a monkey in appearance. He is portrayed in red complexion and a twisted tail similar to a Vanara. He is depicted with a Gada i.e. a mace.

The Mool Mantra of Lord Hanuman -

Apart from Mool Mantra there are also other Hanuman Mantra(s) which are chanted to appease Lord Hanuman.

Hanuman Chalisa, Sunderkand and Bajarang Baan are the most popular hymns to praise and seek blessings of Lord Hanuman.

Some of the most famous temples dedicated to Lord Hanuman are

Other pages related to Lord Hanuman 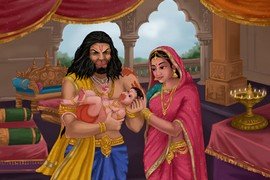