Lord Rama is one of the most respected Gods in Hinduism. He is believed to be the seventh incarnation of Lord Vishnu. Lord Rama was born during Treta Yuga out of four cyclic Yugas described in religious books.

Lord Rama was the eldest son of Dasharatha, the king of Ayodhya. Dasharatha had three wives namely, Kaushalya, Sumitra and Kaikeyi.

Dasharatha performed two Yagya(s), Ashwamedha and Putrakameshti, with the help of sage Rishyasringa (ऋष्यशृंग). During Yagya, Agni sprang out from the Yagya-Kunda and handed out Dasharatha a pot of the Kheer. Agni advised Dasharatha to distribute it among his queens to get blessed with sons.

Lord Rama was the eldest and Bharat was the second eldest son of the king Dasharatha. It is believed that the twin Lakshmana and Shatrughna was born two days after that of Lord Rama. The birth anniversary of Lord Rama is celebrated as Rama Navami which falls during Shukla Paksha of Chaitra month as per Hindu calendar.

Lord Rama and Bharata had dark complexion while the twin Lakshmana and Shatrughna had fair complexion. Most iconography of Lord Rama depicts Him with blue skin similar to Lord Krishna. Lord Rama carries a bow and quiver full of arrows on His back.

According to some versions of Ramayana, Lord Rama had an elder sister also. Dasharatha had a daughter from his first wife Kaushalya. Her name was Shanta and she was given for the adoption to Romapada. Later Shanta was married to Sage Rishyasringa. This daughter was born before the king Dasharatha got married to two other queens Sumitra and Kaikeyi.

Lord Rama being the eldest son of the king was the natural successor of the throne of Ayodhya. But Kaikeyi wanted his son Bharat to be the future king of Ayodhya. In the past King Dasharatha had given Kaikeyi an unconditional promise to fulfill one of her demands. To fulfill his promise Dasharatha exiled his son Rama for fourteen years.

While leaving Ayodhya, Lord Rama was accompanied by His wife Sita and the brother Lakshmana. During His exile Lord Rama killed demon Ravana who had kidnapped Sita by disguising as a sage. The day when Lord Rama killed Ravana is celebrated as Vijayadashami or Dussehra.

After fourteen years Lord Rama returned to Ayodhya and took charge of the kingdom. Diwali, the most famous festival of Hindus, is celebrated to mark the return of Lord Rama after completing His exile.

Lord Rama had two sons Lava and Kusha who were born after Lord Rama abandoned Sita. Lord Rama was an ideal king and his tenure is still known as Rama Rajya. After ruling Ayodhya for many years Lord Rama took Jal-Samadhi in the river Sarayu along with His brothers. 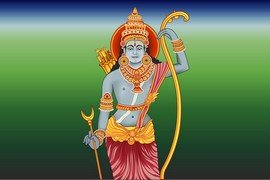