Dating the Era of Lord Rama

Before we work on Age of Lord Rama we need to understand the Vedic division of the time which measures time in Kalpa, Mahayuga and Yuga.

For this discussion we assume that a Kalpa, the half day of Lord Brahma, is the greatest Vedic division of the time. It consists of 1000 Mahayugas. A Mahayuga is composed of four Yugas of different lengths, named as Krita or Satya, Treta, Dvapara and Kali. The Kali Yuga consists of 432,000 solar years. The Dvapara Yuga is double of the Kali Yuga. The Treta Yuga is triple and the Krita Yuga is quadruple of the Kali Yuga.

A Mahayuga therefore contains 10 times the years of a Kali Yuga i.e. 4,320,000 solar years. According to Hindu belief a Kalpa is the half day (excluding night) of Brahma, the god of creation.

Pushkar Bhatnagar has done some work to date the birth time of Lord Rama. According to him "By using a powerful planetarium software, I found that the planetary positions mentioned in Ramayana for the date of birth of Lord Ram had occurred in the sky at around 12.30 p.m. of 10th January 5114 BC."

After considering above time durations for various Yugas, which is already against various Puranas, Pushkar Bhatnagar further assumes that 1 Mahayuga should have been 10,000 solar years long rather than 12,000 solar years to fix 5114 BC as the birth date of Lord Rama.

Pushkar Bhatnagar doesn't explain if Kali Yuga spans for just 1200/1000 solar years then we all should be living in Satya Yuga. According to Vedic wisdom all Yugas are cyclic and Pushkar has taken 3012 BC as the starting year of the Kali Yuga. It is well known that all planetary positions are cyclic and keep repeating in similar patterns including solar and lunar eclipses. There is no work to prove that the similar astronomical events as described in Ramayana didn't occur before 5114 BC.

Till we don't have any concrete historical and astronomical proofs, it would be more appropriate and accurate to say that Lord Rama was born much earlier than 869,114 solar years in the past and according to Hindu calendar it was Navami of Chaitra Shukla Paksha. 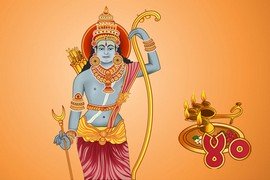