Items which should be included in Rakhi Thali or the items needed to get prepared for Rakhi ceremony are listed below. 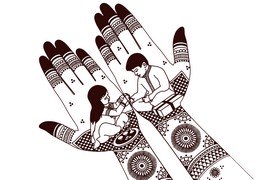