Shri Maha Lakshmi is the goddess of wealth, prosperity and fortune. She is the embodiment of love and beauty. She is the consort of Lord Vishnu. She came out of the ocean during the great churning of Milky-Ocean, known as Kshir-Sagara. Shri Lakshmi, herself only, chose Lord Vishnu as Her husband. Maha Lakshmi is also known as Shri.

According to some religious texts, Maha Lakshmi was the daughter of Bhrigu Maharishi, one of the Saptarshis. She was reborn during the churning of the ocean. Mahalakshmi chose Lord Vishnu as Her husband and resides with Him in Vaikuntha. Shri Lakshmi incarnated as Goddess Sita and Goddess Radha along with Lord Rama and Lord Krishna incarnations of Lord Vishnu.

She is shown wearing red clothes and adorned with gold jewelry. She has calm and soothing expressions. She is shown sitting in a beautiful garden or in blue-ocean.

She is surrounded with either two or four white elephants giving Her Abhishekam with the water. Her Vahana i.e. mounts are white elephant and owl.

The above, 8 forms of Maha Lakshmi are collectively known as Ashtalakshmi. Apart from these 8 forms, Goddess Lakshmi is also worshipped in following Swaroops.

Other pages related to Goddess Lakshmi 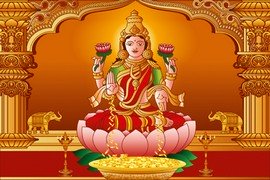